President Donald Trump on Monday January 11, approved a state of emergency for Washington, D.C., through January 24, covering the date of US President-elect Joe Biden’s inauguration on January 20.

The move comes after pro-Trump rioters invaded the US Capitol building on January 6 in support of Trump’s false claims that the US election was stolen from him. Five people were killed in the deadly riots.

The declaration was in response to a letter sent to Trump on Sunday by Washington DC Mayor Muriel Bowser, who already declared a 15-day public emergency for the city shortly after pro-Trump demonstrators stormed the US Capitol.

“Today, President Donald J. Trump declared that an emergency exists in the District of Columbia and ordered Federal assistance to supplement the District’s response efforts due to the emergency conditions resulting from the 59th Presidential Inauguration from Jan. 11 to Jan. 24, 2021,” the Office of the White House Press Secretary said in a statement on Monday.

The emergency declaration authorized the Department of Homeland Security and the Federal Emergency Management Agency (FEMA) to “coordinate all disaster relief efforts which have the purpose of alleviating the hardship and suffering caused by the emergency on the local population, and to provide appropriate assistance for required emergency measures, authorized under Title V of the Stafford Act, to save lives and to protect property and public health and safety, and to lessen or avert the threat of a catastrophe in the District of Columbia.”

FEMA is also “authorized to identify, mobilize, and use discretion to provide resources and equipment to prevent any impacts of violence or situations of emergency.” 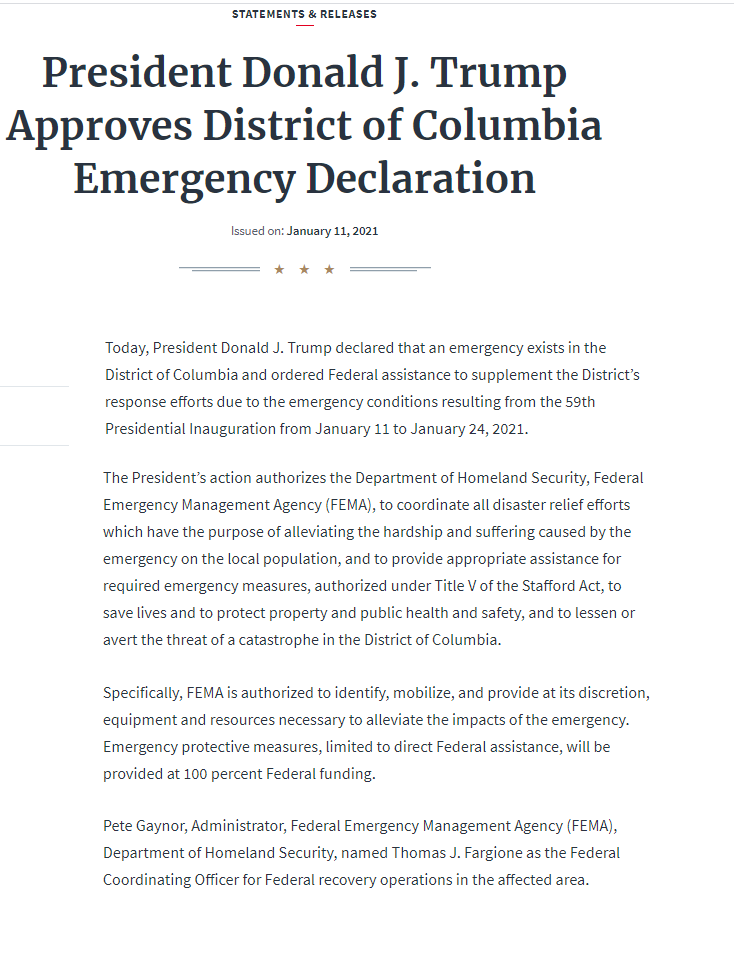