US President Donald Trump, has lashed out at Michelle Obama, her husband Barack and his rival in the forthcoming presidential elections, Joe Biden, after the former first lady issued a criticism of Trump  at the virtual Democratic convention on Monday night.

In a pre-taped message that aired at the virtual convention, Michelle Obama rebuked Trump’s character and record as she urged voters to cast ballots for Biden in the upcoming November election.

She described Trump as the “wrong president” for the United States and warned of more difficult times if he is reelected.

“Let me be as honest and clear as I possibly can. Donald Trump is the wrong president for our country. He has had more than enough time to prove that he can do the job, but he is clearly in over his head. He cannot meet this moment. He simply cannot be who we need him to be for us. It is what it is,” the former first lady said.

“if you take one thing from my words tonight, it is this: if you think things cannot possibly get worse, trust me, they can; and they will if we don’t make a change in this election. If we have any hope of ending this chaos, we have got to vote for Joe Biden like our lives depend on it,” she added.

If we want to end the chaos and division—and keep alive the possibility of progress on the issues we hold dear—we’ve got to vote for @JoeBiden and @KamalaHarris like our lives depend on it. Register today by texting VOTE to 30330. https://t.co/xPu5o0SYLJ

In a series of tweets posted on Tuesday August 18, Trump said he wouldn’t be president if not for Obama’s failures. He then went on to call presumptive Democratic presidential nominee Joe Biden an “afterthought” and accused former President Barack Obama of giving a “very late & unenthusiastic endorsement” of his former vice president despite they both worked together for 8 years.

“Somebody please explain to @MichelleObama that Donald J. Trump would not be here, in the beautiful White House, if it weren’t for the job done by your husband, Barack Obama,” Trump tweeted 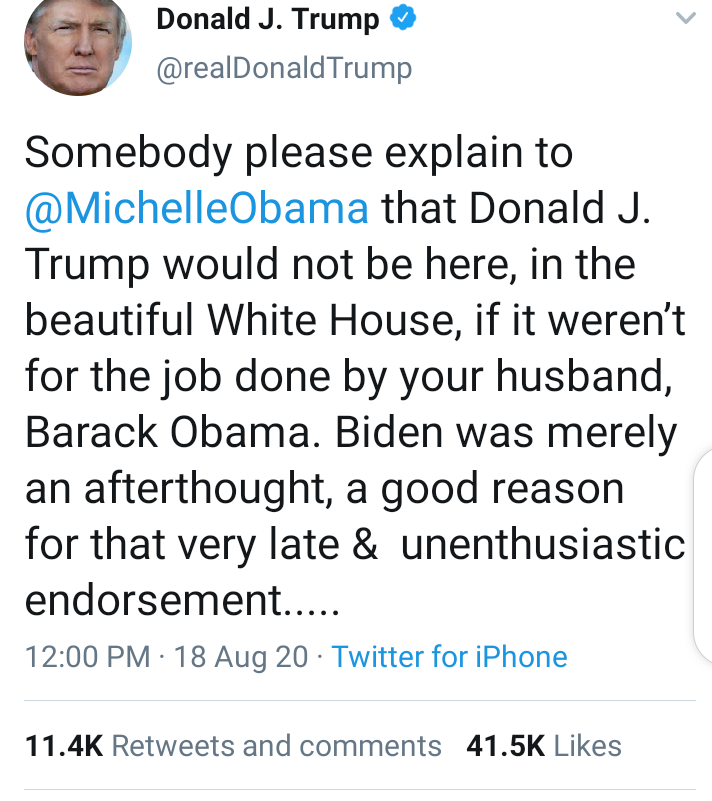 “My Administration and I built the greatest economy in history, of any country, turned it off, saved millions of lives, and now am building an even greater economy than it was before. Jobs are flowing, NASDAQ is already at a record high, the rest to follow,” Trump continued, defending his administration’s response to the novel coronavirus, which has now killed more than 170,000 Americans and devastated the U.S. economy. 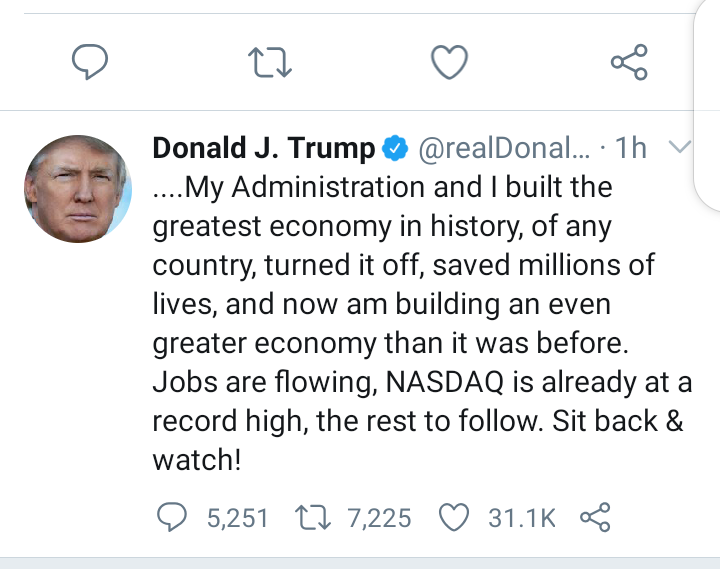