Kiki Mordi has reacted to being accused of  “wrongly” passing off Sex for Grades documentary as hers.

It was reported earlier that Ruona Meyer went public with the claim by alleging that Sex for Grades documentary was pitched and sourced for by another female journalist, Oge Obi.

However reacting to this, Kiki accused Ruona of being livid each time she wins an award. She added that she is trying so hard to understand what she did to Ruona except unfollowing her on Twitter.

She tweeted in response;

The other time she “uncovered” my real name. It’s on my whole website, Wikipedia page and it’s my Facebook name where she’s friends with me. If this isn’t joblessness tell me what is? Some investigative journalist!

Kiki accused Ruona of being “vile”, and also shared screenshot of a chat in which she told her not to retweet Fisayo Soyombo’s story on Nigerian prisons to back her claim. She affirmed that she is the reporter of Sex for Grades Documentary and every other question will have to be directed to BBC.

Every new day I win an award, Ruona loses it. I will never understand what I did to this woman besides unfollowing her on Twitter

The fact that I’m blocked makes it harder for me to even know what she’s talking about. It’s always some bullshit, are you that bored?

One minute you’re advising me on how to hog clout and not retweet Fisayo Soyombo’s story. Because I figured you were a vile person, you left me and found your next victim . 50 minutes call the first time you ever spoke to me was to tell me who to hate and who not to hate???

The point of this particular tweet is that Ruona is a fisherwoman, if you chop her bait you’ll be taken for idiot. If you don’t, she’ll use the idiot that chopped her bait against you. It’s a sad life really.

There is no side to any story. Investigative journalism is dangerous work. I am the reporter on #SexForGrades Any other questions will have to be directed to the BBC Don’t be roped into Ruona’s joblessness. This isn’t local media where people do what they like

You must really be foolish to think Ruona is your go-to for “inside scoop” when she’s not even “inside”. Ma’am. Please. 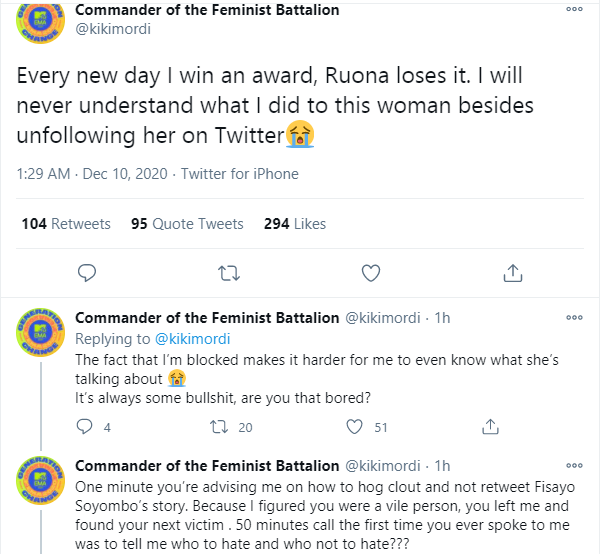 Ruona fired back by tweeting;

Lmao journalism ain’t rap. One pitched a story, got sources, did the indercover work, risked life for footage and exposè that your Jay-Z is selling upandan. One has suffered immense strain after, and bravely admitted publicly their grieviances, so the other should share credit/$$

Today is not the day we will talk about award organisers that reward dishonourable journalists for work produced via unethical means. Person go need chop rice finish before e touch di meat. Let sis get her rightful coins first. 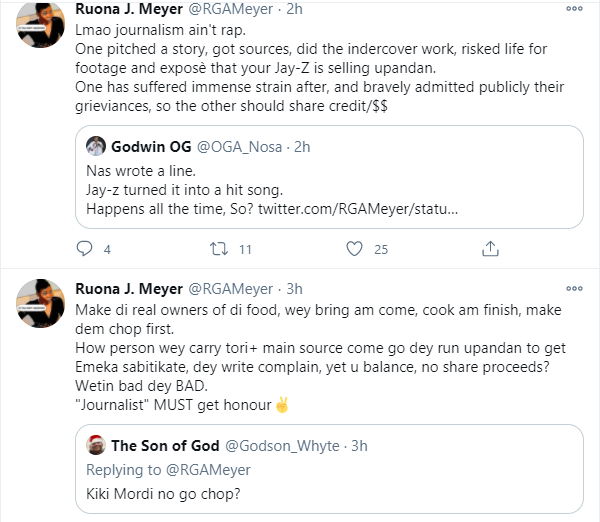 Ruona also made a clarification on the screenshot of the chat Kiki shared. She stated that she was begging her for tips on what she did to maintain SEO (Search Engine Optimization),

Lmao Nkiru Mordi @kikimordi  in true fashion. Hushpuppi of journalism. YOU called me, as recommended by C of Africa Eye & BEGGED me for tips on what I did to maintain SEO. If u applied yourself To this profession you’d KNOW external clicks redirect away from ur site. Journ 101.

On a good day, clout chasers like you are why one may not deign to take calls or help others, but I will call you out so you do not ruin the chances for others. I sat in that newsroom when that story was pitched, which is why when I found out, I stoppes promo-ing it as asked to.

Stop seeking my smoke. You go CHOKE. Have honour, share the proceeds not mouthing thanks & emojis to the extent a human feels the need to call you out. O’s thread exists. Y’all deal with THAT. You did THAT. Go sort it. And stop crying because ICFJ food wan comot ur detty mouth

Lmao @kikimordi climb down from trailer you no hear. Please go back to school so that basic SEO and how to increase virality does not somehow come out of your brain as one telling you not to tweet my own broda story

Na Big Chief kuku say some of una will never get sense.

Oh yes! Because how dull can Nkiru be to be sharing a screenshot that shows me saying “application” and “uni,” and tell people I was using the convo to tell you to do clout? Kids, say no to igbeaux o. Before you do pass yourself. 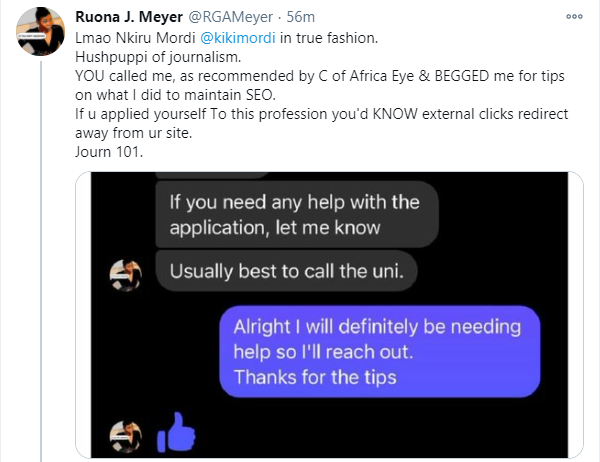 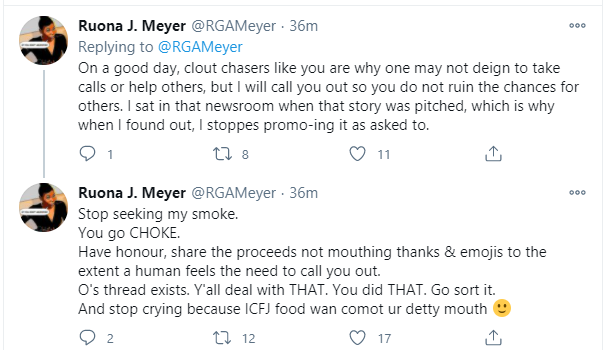