Man accused of slapping police officer in Lagos charged to court, remanded in custody till January 2021

Man accused of slapping police officer in Lagos charged to court, remanded in custody till January 2021

A Nigerian man who was arrested on Sunday, December 6, for allegedly slapping a police officer along Governor’s road in Ikeja, Lagos state, has been arraigned in court.

A tweet posted by the Lagos state police command on Sunday December 6, alleged that the young man caused an accident, then slapped a police officer twice and threatened other police officers deployed to the scene.

”This man who caused an accident along Governor’s Road, Ikeja has been arrested for slapping a Police officer twice and threatening the entire team deployed to the scene when the accident occurred. He has been handed over to Alausa Police Station for necessary action.”

Giving an update on Tuesday afternoon December 7, the state police command said he was charged to court this morning and that the court ordered he be remanded in police custody until January 2021. T

”UPDATE: This suspect who was accussed of slapping a police officer on the 6th of December has been charged to court and he pleaded not guilty. The case has been adjourned till the 20th of January 2021 while he has been remanded till the adjourned date.” 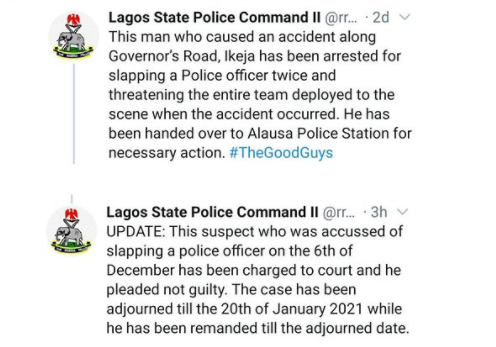