Nigerian Man Gives Broad Explanation On Why ‘SUYA’ Is Unhygienic

Nigerian Man Gives Broad Explanation On Why ‘SUYA’ Is Unhygienic

A Nigerian man identified as Danny walter on twitter has taken his time to give a broad explanation on why SUYA is unhygienic to consume.

According to the man, the process the meat goes true before it becomes SUYA is the reason why it is not advisable to eat it.

In his words ” SUYA is actually one of the most unhygienic foods we consume. From the hand touching, to the rusted Grill that’s barely ever washed but we are not ready for this conversation. “

It has been called a unifying factor in Nigeria. Suya has become a Nigerian national dish with different regions claiming the superiority of their recipe and methods.

For those who do not know what Suya is, it is a spicy meat skewer which is a popular food item in West Africa. Suya is generally made with skewered beef, ram, or chicken. Innards such as kidney, liver and tripe are also used. 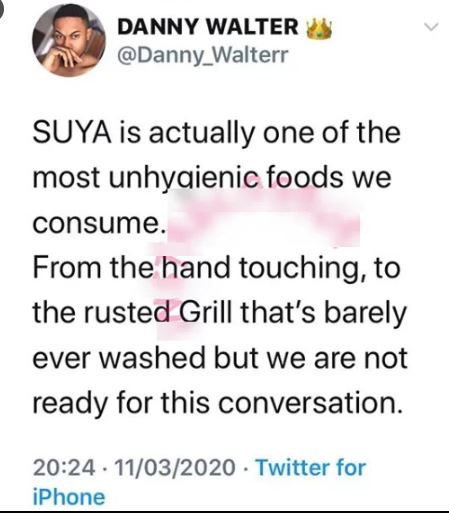