PLUG: US Jail Where Hushpuppi Is Chilling His Head After Swindling Over 1m Victims

PLUG: US Jail Where Hushpuppi Is Chilling His Head After Swindling Over 1m Victims

Details of the Metropolitan Correctional Center in the United States where Hushpuppi is being detained have been made public.
Photos of the Metropolitan Correctional Center in Chicago, the US where alleged fraudster, Hushpuppi is currently being held have been released.
Remember that weeks ago, the Instagram celebrity who was seized in Dubai and was later extradited to the United States of America.
He appeared in court last Thursday.
He was charged with running a global fraud operation, including targeting a Premier League football club, a bank, and a US law firm.

Ramon Olorunwa Abbas, 37, who declares to run a real estate business, is alleged to have conspired to launder hundreds of millions of dollars through business email compromise (BEC) frauds and other scams, the US Department of Justice (DoJ) said.

He is also accused of laundering $14.7m stolen in a cyber-heist from an unnamed bank in February 2019, sending the money to bank accounts around the world.
Plug photos of the Chicago jail below: 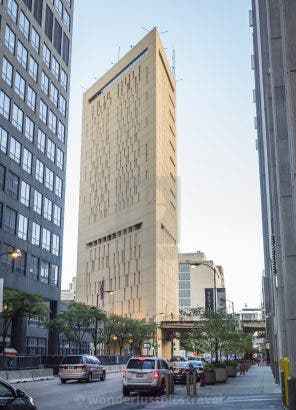