A Sheikh has defended the beheading of a French teacher by a Muslim immigrant student.

Samuel Paty, 47, was beheaded with a long knife by 18-year-old Abdoullakh Anzorov for showing cartoons of the Prophet Muhammad in class.

Abdoullakh, who grew up in France from age 6, was later gunned down by the police.

A number of Islamic leaders have defended the beheading.

Tunisian MP Rached Khiari had defended the beheading, saying: “Insulting the prophet of God is the greatest of crimes and anyone who commits it, whether a state, a group or an individual, must accept the consequences.”

Now, Sheikh Issam Amira, while delivering a Mosque lesson, said the beheading of Paty is “a great honour to all Muslims.” 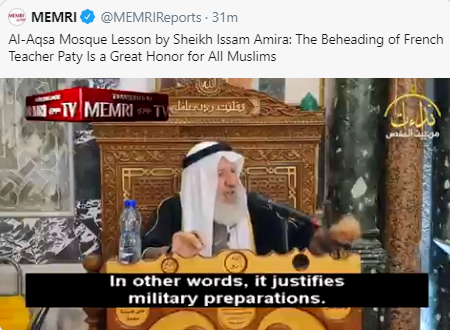