Famous Media personality, Toke Makinwa has responded to the news of Cynthia Morgan accusing Jude Okoye, the CEO of her former record label ‘Northside Records’ of her career misfortune.

In an Instagram live interview, the dancehall artiste explained how she went through a lot with Jude Okoye, and how she could have fought him because she had a lot of dirt on him.

The German Juice singer also spoke on how she was battling a life-threatening illness for over a year and how she had to relocate to Benin to cut costs.

In response to the damning cases, Toke Makinwa took to Twitter to give her opinion on the matter.

She wrote: “There has to be more ways to settle this Talent/record label/management relationships, nobody wins when there is no resolve, monies are still owed, talent is still wasting, there is a bigger picture that pride/ego rubs everybody of when we refuse to see the big picture.”

She added: “f Talent wants to leave or no longer serves the purpose to a label, remove feelings and look at ways that they can go, become bigger and pay your debt. Nobody makes anyone, there was talent there, that’s why you chose to invest, let them go and focus on how they pay your investment.” 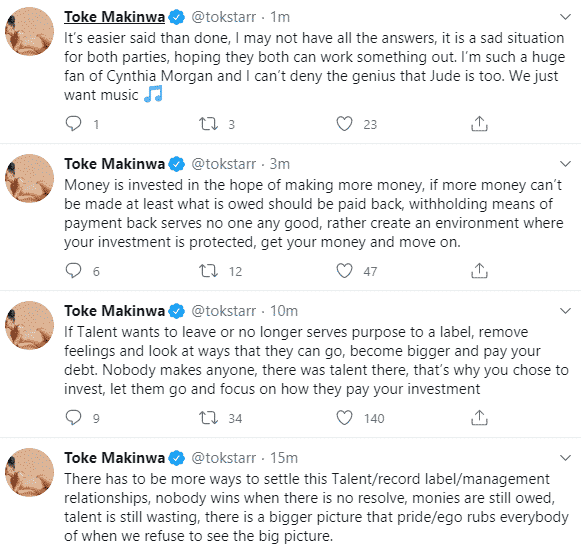