US 2020 Election updates: “We are going to win this race, the numbers tell us it’s clear”- Joe Biden tells supporters

US 2020 Election updates: “We are going to win this race, the numbers tell us it’s clear”- Joe Biden tells supporters

In anticipation of becoming America’s 46th president if he maintains his lead in Arizona and Pennsylvania, Joe Biden has expressed confidence to his supporters that he would win the presidency from incumbent President Donald Trump.

Biden, a former US vice-presodent running under the Democratic party, said he expected to end up with over 300 electoral votes, more than the 270 needed to claim the White House.

He also expressed satisfaction with his lead in the popular vote — in which he led Trump on Friday night by an estimated 4 million votes. 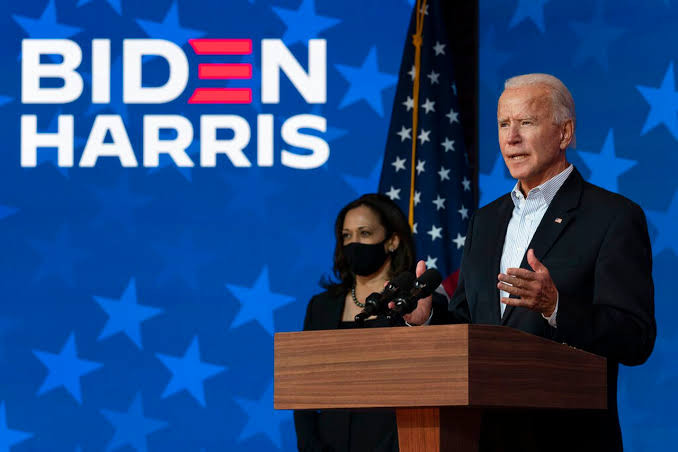 “My fellow Americans, we don’t have a final declaration of victory yet, but the numbers tell us it’s clear,” Biden said at a late nighttime speech in Wilmington, Delaware with vice presidential candidate Kamala Harris by his side.

“We are going to win this race,” Biden said. “Just look at what has happened since yesterday.

“Twenty-four hours ago, we were behind in Georgia, now we’re ahead, and we are going to win that state,” he said.

“We’re going to win this race with a clear majority, with the nation behind us,” he said. “We’ve gotten over 74 million votes — let me repeat that — 74 million votes. That’s more than any other presidential ticket in the history of the United States of America.

“And our vote total is still growing. We are beating Donald Trump by over 4 million votes. And that’s a margin that’s still growing as well.”

Biden also said he and Harris are already preparing to assume office, even though they haven’t been declared the winners.

“The pandemic, as you also know, is getting more worrisome across the country. Cases are skyrocketing,” he said.

“It’s believed we could see as many as 200,000 cases a day, and the death toll is approaching 240,000 lives lost — 240,000 empty chairs across America. We’ll never be able to measure that pain, the loss, the suffering, that so many families have experienced,” Biden said.

“We can’t save any of the lives that have been lost, but we can save a lot of lives in the months ahead.”

Biden said he and Harris also heard from experts “about how this recovery is slowing because of the failure to get the pandemic under control.”

“More than 20 million people are on unemployment. Millions are worried about making rent, and putting food on the table. Our economic plan will put a focus on a path to a strong recovery,” he promised.